Disasters come in both natural and manmade forms and are always devastating to those involved. With that constant awareness of people's needs, when disaster strikes, The Salvation Army is often among the first on the scene. Our trained personnel are always available to meet emergencies by providing food, shelter, clothing and spiritual comfort. The Salvation Army's first aim is to meet the basic needs of those affected, both survivors and first responders (such as firefighters). 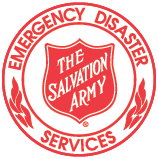 History of Disaster Services in The Salvation Army

Whether a local incident or a major disaster, The Salvation Army staff and volunteers are often the first on the scene and the last to depart, honoring a century-old commitment to serve those in need, at the time of need, and at the place of need.

The Salvation Army disaster response teams, coordinated and directed by commissioned officers and trained personnel, supported by volunteers, are 'on call' to serve at all disasters and civil disorders which place a community or its populace at risk or which may disrupt or destroy family security and well-being.